What he said. Surely your relationship with the woman who raised you is about more than whether or not she agrees with Rachel Maddow or Bill O’Reilly. Choose to enjoy, rather than bury, the memories you share with that friend of 40 years. 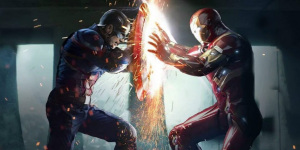 I finally saw “Civil War,” the umpteen zillionth movie in the unendable Avengers series.  It was quite enjoyable but there was one scene in which all the that-would-never-happen-ness came to a point.  The bad guy has just explained with utmost clarity and precision how and why he moved heaven and earth to set the Avengers against each other.  He knows he could never destroy them so he manipulates them into destroying each other.  “See?  That’s what I’m doing!  I’m playing you!”

To which Tony Stark, of all people says, “Great idea!” and starts wailing on Captain America.

I thought that really took the audience well past suspension of disbelief into delusional territory.  You’d have to be crazy to buy in to the premise that the smartest man in any given room would let himself be played.

My my.  Such crazy!  Such eagerness to follow pipers! …