The heavenly announcement that Immanuel had arrived first came to the least likely people. Shepherds were loners, spending most of each year outside of the cities and communities, keeping watch over sheep. They were an essential component of society but they were nevertheless part of an unsightly profession. They were probably the most remote, least social, most invisible people to spend this news upon.

The message came not to the important nor the socially connected. Not to the centers of city and government but to the forgotten wilderness. Why?

Consider that they were shepherds! Christ called himself a shepherd: we are his sheep. He lays down his life for the sheep. His sheep hear his voice and follow him. They trust him and only in him do they find comfort and safety. These men understood the role of the shepherd, and to shepherds first this Shepherd became known. 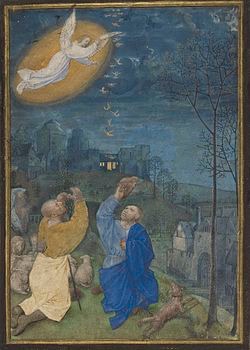 There is a simple principle in Scripture, and in God’s economy. The least will be greatest; the last shall be first. The father knows that it is the neglected, the humble, the poor who are likely awake to his message.

The shepherds were awake. Jesus Christ was born deep in the night. Most people were in every way asleep. The most significant announcement in all of human history did not put on an extravaganza in the palace of the most powerful ruler. Only these lonely shepherds, wide awake and vigilant, experienced an angel’s announcement and a heavenly host’s praise!

Note that we are commanded more than once to be, like the shepherds, “awake.” This piece of news was not anticipated nor expected. There had been no prophets for 400 years. Aside from Holy Writ, God’s voice had remained silent for generations. How astounding was it that these few overnight shift laborers encountered such a message! Almighty God opening his intentions to the world, sending a message of hope and comfort, through these humble men. What a privilege.

God has always commissioned humble messengers. The rich and powerful were rarely chosen to be the bearers of his message. The shepherds— poor, outcast, possibly unkempt — ran and told what they had seen and heard to everyone who would listen. They presented a challenge to their hearers! One had to meet their news with one’s own measure of humility in order to believe their story, and to join them in becoming “awake.”

1 thought on “Why Shepherds?”