OK, so let’s get down to fundamentals. If you are pro-choice, your argument is founded on an assumption of higher moral standing. You are fighting for rights, you are taking the high road, you aren’t one of those who want to control women, etc. You are more virtuous, and you signal that fact all you can.

But you are not more virtuous. In fact, your position has no virtue at all.

The prochoice position depends on dehumanizing or otherwise negating the worth of other human beings. Those human beings are the most helpless and innocent there are.

The pro-choice position depends on then advocating for their deaths!

It is all about death. Destruction. Hopelessness. Victimization. Elitism. Privilege (the advocacy of ). Imposing the strong’s power over the weak. Manipulation. Disenfranchisement. Injustice.

That is my premise, as it ought to be the pro-life movement’s premise. Now please defend your pro-death position.

I invite you to think about these things.

Rather than register shock and horror, then eagerly place that item on a back shelf marked: ABERRATION; let us acknowledge that we really do live in such a world.

But let us also notice that against that one evil act, we can counter with several acts which were its polar opposite. In fact, that evil act was countered with several (at least) selfless and noble acts.

A football coach shielded students from bullets with his body, and died. A geography teacher ushered students into his classroom for protection but never made it inside. A quick-thinking ROTC student protected 60 to 70 people from gunshots behind Kevlar. Another teacher hid 19 students in a closet. A janitor warned about 40 students that they were running toward the shooter, and ushered them into a safe classroom. A 15 year old held the door for fellow fleeing students but was shot dead.

In the face of that evil act, these people responded by trying to save the lives of other people at the expense of their own. That requires incredible empathy, other-centered-ness, and self-sacrifice.

Greater love has no one than this, that he lay down his life for his friends

It suggest belief that there is right and wrong, good and evil; that life is objectively valuable and better than death. And a belief that such horror and hate ought to be met with its opposite.

We live in that world too.

But we tend to live in the world of our mind’s making, the one in which we feel comfortable, the world as we imagine it. We might even secretly congratulate ourselves for choosing the world we do. I’m the kind of person who sees the world positively, so I’m a loving person. Or I see the world as tough and harsh, because I’m strong and a realist.

But those imaginary worlds don’t prepare us for the real one. It might be better to recognize the world we live in so that we can encounter it usefully. We can recognize that pure nihilism can cross our path, and we can choose to respond with selfless love.

That there will be more evil there is no doubt. Let us be prepared.

There are many other thoughts you may have on this matter. This was one.

Truth matters absolutely. The nature of truth requires that I value truth before my own preferences. Truths are true no matter that I ignore or disagree with them.

Here is a simple truth on a particular subject. Human life has intrinsic value and meaning. Its Creator and Designer has clearly expressed this truth, in both word and action. *

Here is a conclusion which I draw from that truth: if you are a supporter of legal abortion or Planned Parenthood, you are making a truth claim against the intrinsic value of all human beings.

Indeed you are claiming that no human being is intrinsically valuable.

Not the unborn fetus, not you, not me, not anyone.

This won’t be news to those pro-abortion supporters who are honest or who rise above the virtue-signaling level of activism. They will say that  the unborn have no rights that we are bound to respect. Dred Scott meet Hillary Clinton.

And so, you and I are living in a world in which we each receive our value from something outside of ourselves. I have some limited power to assert that I matter; some people are better at convincing others of their value than other people are; some people have no power at all. Compare a charismatic sociopath to a disabled newborn–who wins?

One who negates the value given by the Creator of all things is in a difficult place when asked to justify human life in an objective way.

People who are thoughtful believers in Jesus Christ have a fundamental understanding that every single human being who was ever conceived has intrinsic and equal value. That value is not subjectively granted or acquired.

You who are pro-choice believe you’re virtuous because you care about the rights of women so much that you assert that they have an absolute right to societal approval and public funding of their abortions. Even while this right is exercised at the cost of many millions of human lives.

But let’s put aside the divine element for a second, as you would have it.

You pit one life against the other.  You must do that if you believe that value is conferred rather than already present. Whose rights win the contest? is your context. You believe in a zero-sum proposition: one has value or the other does, and we must choose. But what is your solution if both have equal value that we must honor?

And since there is no absolute or objective conferrer of value, who will we respect as worthy to grant worth to us? This is a question you cannot dismiss. Someone will come along and claim that right, and assert the power we’ve given him. We’ve seen that movie many times, and the results are always tragic, ugly, and anything but virtuous.

So God created man in his own image, in the image of God he created him; male and female he created them. Genesis 1:27

Behold, children are a heritage from the Lord, the fruit of the womb a reward. Like arrows in the hand of a warrior are the children of one’s youth. Blessed is the man who fills his quiver with them! He shall not be put to shame when he speaks with his enemies in the gate. Psalm 127

“Cursed be anyone who takes a bribe to shed innocent blood.” And all the people shall say, “Amen.”  Deut 27:25

For you formed my inward parts; you knitted me together in my mother’s womb.  Psalm 139: 13

Your eyes saw my unformed substance; in your book were written, every one of them, the days that were formed for me, when as yet there was none of them. Psalm 139:16

Do nothing out of selfish ambition or vain conceit. Rather, in humility value others above yourselves, not looking to your own interests but each of you to the interests of the others. Philippians 2: 3-4

My recent blog post War on Children produced a conversation. Here is an excerpt from one of the commenters:

“There is no “human being” until full bilateral synchronization [of the brain]. Please understand that. Please get that straight in your head. A human being can die. Before week 28 nothing can “die.” Period. So, if you want to use language like “kill” and “murder” then you must tell me, and everyone reading this, how you can kill something that cannot die…”

The author of this position then asked repeatedly, “Tell me, how can you kill something that cannot die?” as his trump.

So the arguments are:

A fetus is not alive until 28 weeks gestational age. (It is not a human being either?)

Before “brain synchronization”, it is not living, therefore it is not something which can die.

That baby in your belly moved because it was nothing more than “electrical impulses firing, causing movement… like firing shocks through a [dead] frog’s leg.”

This blogger equated death (the cessation of life in a previously living being) with the early stages of human development. No distinction was recognized even though a fetus meets every criteria for life and humanity. Blogger also would not define the terms of the discussion, particularly regarding whether the critical question was the fetus’ life/non-life, humanity/non-humanity, or sentience/ non-sentience.

Incomplete brain development = not living yet OR not human yet = we can dispose of it and it’s a morally neutral act. 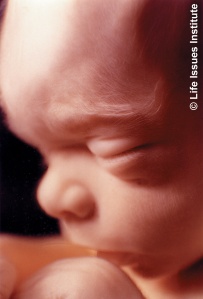 What is this position really? What are all positions which pinpoint some arbitrary criteria which allows functional human adults to excuse the termination of millions of unborn human beings?

It is discrimination imposed upon some human beings based on their incomplete development.  It is a defense of legal termination based on inability, temporary handicap, or the incomplete growth process.

It is disqualifying still-developing children for life, even though if they were left to grow (not killed), they would become fully able.

Making termination of human fetuses legal up to a certain point in their development is exactly this.

Abortion culture sometimes uses pre-viability as a boundary for guilt-free termination.  A moving goalpost if there ever was one; and since it moves as science advances, it cannot have ever been an ethically-based position.

Roe vs. Wade, the 1973 case legalizing abortion, made fetal viability an important legal concept. The Supreme Court ruled that states cannot put the interests of a fetus ahead of the interests of the pregnant woman until the fetus is “viable.” ~ Slate

But why was viability ever the benchmark anyway?

While the unborn are weakest, while they are the most defenseless and vulnerable, while they need the most nurture…that is when we allow them to be eliminated. This is the opposite of Christian ethics, or even human ethics.

We are meant to protect most exactly those who need protection most.

In God’s design, babies are helpless for at least one good reason. Their dependency is supposed to elicit an instinctual response in adults, particularly females and more particularly mothers…for protectiveness and for the desire to nurture. It’s built into us.

We were designed to be the protectors of those helpless lives. Carrying those tiny lives within our bodies is supposed elicit obvious and intuitive impulses to protect. This is not altruism; it is not extraordinary but natural.

What we see now is a whole culture of  females denying those impulses to nurture, calling those impulses oppressive and disturbed. In favor of lateral peer dependence, they will purposely make themselves cool calculators who are just fine with ending the lives of the weakest of human beings.

Our culture has chosen a position which favors self-serving and arbitrary criteria for inclusion, and death as the default for those who fail to qualify. We kill the weak.